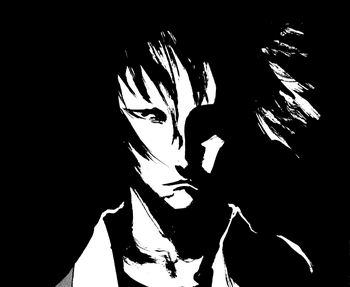 Kiron is the Master Swordsman of Chronos. After much battle prestige, Kiron chose a quiet retirement over a government post. By chance he saved the child Ares from an assassin and raised him. During their six years together as master and apprentice, he imparted his skills to the boy as his eyesight slowly failed. They lived quietly until Kirberos, the Red-Eyed Swordsman, tracked them down. Kiron fought well until Kirberos used Ares as bait to lure the now completely blind Master Swordsman into a wooded copse whose layout he did not know as well as his own property. Kirberos killed Kiron and added Kiron's sword to his collection. Ares vowed to not return to his master's grave until he had defeated the Red-Eyed Swordsman.

The late Master Swordsman of Chronos was also known as the Swordsman of the Wind for the sound made by his blade as he fought.

Retrieved from "https://vagrantsoldierares.fandom.com/wiki/Kiron?oldid=4211"
Community content is available under CC-BY-SA unless otherwise noted.