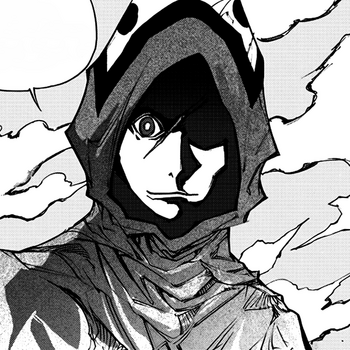 Kirberos is the Red-Eyed Swordsman. He is infamous for killing other swordsmen and collecting their swords. He killed the Master Swordsman Kiron after Kiron had gone blind and took the right eye of his young apprentice, Ares. Although he is of mixed blood, his eyes are a "purer" red than full-blooded Red-Eyes. He is younger brother to the captain of the Black Knights, but he refuses to acknowledge his "weak" older brother.

Kirberos' fighting ability is so fearsome that none will claim bounty on him. The weapons of those he defeats he wears on his person and switches them out during battle.

He currently has six swords in Chapter 204. The first two are swords that he uses at the same time, he is ambidextrous, they are swords of high quality but are not unique in any other way. The second pair are swords, he ties together to form a weapon like Baroona’s. The wire is not as strong as Baroona’s wire based on the fact that Ares easily cuts through it. However the swords are so sharp they can also easily cut through Baroona's wire, although previous characters have failed to. His fifth sword is a bendy sword that he used to take Kiron’s left eye. Ares nicknames it the Squid/Tentacle sword. It is used in the way that when a swordsman tries to block it with a sword, it will curve around the sword and stab them. It can be blocked by a long weapon, Ares counters it with a house lamp. The final sword, not yet shown in action is Ares' master’s sword. It was the most recent sword that the Red-Eyed swordsman has gained. He is killed by Ares.

Kirberos is a genius who devoted all his life to the sword. He defeated countless opponents. He walked all the cities and countries in search of strong opponents and collecting their swords. He even managed to kill old Kiron. Then, even his name inspired terror, and all contestants died, unable to understand what happened. When they sent him a whole army of hunters, he easily killed the strongest of them and lost only to Ares.

Agility - Kirberos is very clever and utilizes his arms and legs to good use in combat. If his sword is repelled, he can deliver a crushing kick or grab an enemy's hands. And he blows strong enough to knock out an experienced warrior.

Speed ​​- Kirberos is incredibly fast. Behind him can not keep up even experienced craftsmen, who think that red-eyed just disappeared in one place and appear in another.

Retrieved from "https://vagrantsoldierares.fandom.com/wiki/Kirberos?oldid=4235"
Community content is available under CC-BY-SA unless otherwise noted.