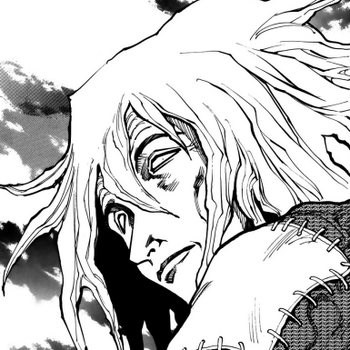 "Silver Wolf" Kaiser was Mikael’s master. He is an old man who lives with his grand daughter. He acts senile but is actually very sharp witted and skillful with his sword.

He is first introduced after Icarus’ defeat against Mikael at Hakuna. Mikael takes Kaiser's granddaughter hostage in order to blackmail him into assassinating Icarus. By this time, Icarus has recruited Ares, Baruna and Douglas as bodyguards, so Kaiser ends up fighting the three and being killed by Ares.

When he was younger he fought with Kiron. He defeats Kiron after several hours of fighting, but doesn't kill him. As he leaves he tells Kiron not to waste the life that he has spared.

A genius who devoted all his life to the sword. He defeated countless opponents. Even the great Kiron lost to Kaiser. Over the years, his skills inevitably deteriorated, but there were quite enough to fight alone against Douglas, Baroona and Ares. And he was almost defeated in this fight (seriously wounding the first two and losing only to Ares).

Agility - Kaiser is very clever and uses his arms and legs to good use in combat. If his sword is parried, he can deliver a crushing kick or grab an enemy's hands. And he blows strong enough to knock out an experienced warrior.

Heightened senses - All of Kaiser's senses are sharpened incredibly, especially hearing. He hears the slightest movement of air that accompanies any attack of the enemy, and at the expense of someone else anticipates attacks.

Retrieved from "https://vagrantsoldierares.fandom.com/wiki/Kaiser?oldid=4212"
Community content is available under CC-BY-SA unless otherwise noted.